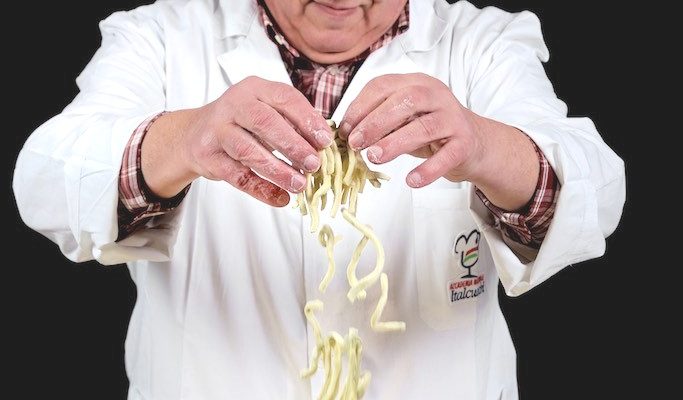 Scialatelli is a recent innovation, compared to many other pasta shapes from Italy. The Italian chef Enrico Cosentino first devised it in the late 1960s in his native Amalfi, while working in a local restaurant, and it gained him recognition for it in 1978, when he won the Entremetier prize in an international culinary contest. He tells that he invented scialatielli to lose time because he had nothing to do. Anyway, the invention took 3 months of experiments to reach the result that we eat nowadays.

It is a type of thick and short linguine-like pasta featuring a rectangular cross section. It is typical of modern Campanian cuisine, having originated on the Amalfi coast as a chef’s specialty but it has also spread in nearby regions such as Calabria and Basilicata (respectively, in the area of Catanzaro and Potenza).

Scialatiello (singular for scialatielli) may come from Neapolitan words scigliatiello or sciliatiello, a derivative of the verb sciglià (“to ruffle”), and it roughly translates to “ruffled”: just like ruffled hair, scialatelli indeed look like “ruffled” strips of pasta when set in a dish, as each strip has a slightly irregular shape after being hand-made and plainly cut by a kitchen knife. Another theory about this pasta name is that it comes from Neapolitan scialà (“to enjoy”) and tiella (“pan”), though it rather sounds like a folk etymology resulted from a linguistic corruption of the original word.

Scialatielli perfectly match with seafood, but you can taste its incredible tastiness also with a simple tomato sauce. 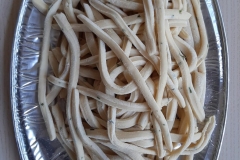 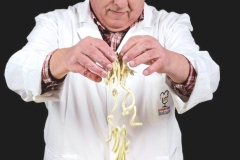 Massive Attack Video – Why I love Naples
Lonely Planet: Naples is the coolest city in Italy